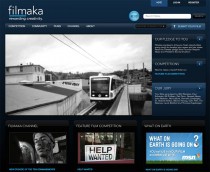 Filmaka.com announced a partnership with WhatOnEarthIsGoingOn? to provide creative artists around the world with an opportunity to produce content for its socially relevant online channel – WhatOnEarthIsGoingOn?, distributed on MSN. In support of the new venture, Filmaka is enabling its members to submit films that are impactful, ignite passion and evoke positive change from all corners of the globe beginning today.

To coincide with the launch of the channel in August, “What On Earth Is Going On?” is also the first theme, kicking off a series of quarterly competitions that will take place throughout the year. Each quarter, 15 finalists chosen by the Filmaka community will be awarded a cash prize of $1,500 each. These films will be hosted on the channel, where they will available to stream before half a billion people around the world.

When showcased on the premiere of WhatOnEarth’s MSN channel, the films will be judged by a panel of industry experts, including controversial and acclaimed documentarian Nick Broomfield, award-winning filmmaker and Founder of Pangea Day, Jehane Nouijaim, Founder of Filmaka, Deepak Nayar and will be chaired by Founder of WhatOnEarthIsGoingOn?, David Alberts. The award-winning jury will select two of the finalists per quarter for a further commission. These two filmmakers will be awarded an additional $10,000 each to make another short film for an exciting new project entitled “A Global Tapestry,” a collaborative film in which each director will contribute their interpretation of a common theme.

“We are pleased to give our global community of aspiring filmmakers an opportunity to work with such a noteworthy organization as WhatOnEarthIsGoingOn? and to have their creativity highlighted on the world’s most popular Internet destination. This initiative underscores our commitment to provide aspiring directors and writers with real-world opportunities while promoting social change,” said Sandy Grushow, president, Filmaka. “Our connection with WhatOnEarth and MSN ensures that high-quality, meaningful films will be seen by more than 500 million people.”

“WhatOnEarthIsGoingOn? is a wonderful platform for Filmaka members to share their stories and gives viewers the opportunity to compare and contrast the attitudes and beliefs of different people, cultures and countries,” said David Alberts, founder, WhatOnEarthIsGoingOn? “I am excited to partner with the Filmaka team and MSN to create something that can really make a difference in the lives of our audience and spotlight the issues that matter.”

WhatOnEarthIsGoingOn? is one of several branded entertainment competitions that Filmaka has launched to benefit its global community of filmmakers, industry veterans and business partners. Major media companies and brands such as FX Network, SAB Miller, Love Film and record label Surrender All (UNKLE) have all enlisted Filmaka to create content for traditional and digital media, as well as integrated marketing campaigns.

Filmaka is currently accepting submissions for its “What On Earth Is Going On?” competition. All entries will be showcased on www.filmaka.com where additional information can be found.

Filmaka is a global digital entertainment studio and robust on-line creative community for aspiring filmmakers. Filmaka is committed to inspiring, celebrating and rewarding creativity and talent by providing professional opportunities for undiscovered directors and writers from all around the world. The unique mechanism is a series of competitions which are juried by industry leaders. Each month, Filmaka challenges its community to create original, professionally produced high-quality scripted and unscripted films, webisodes and branded entertainment, ranging from funny or provocative, to dramatic or animated. Rewards range from cash prizes to the opportunity to create series for traditional and digital media. Filmaka will also produce at least one feature film and documentary directed by community members.

WhatOnEarthIsGoingOn? was founded in January 2008 by David Alberts. David has created award winning, multi-platform advertising campaigns in over forty-two countries for some of the largest brands in the world and most recently was Chairman and Creative Director of Grey London. WhatOnEarthIsGoingOn?’s mission is to use power of technology and creativity to produce entertaining and involving multi-platform content that can enthuse interest and participation in positive social change. WhatOnEarthIsGoingOn? is in partnership with Charles Garland, founder of Crystal Entertainment and formerly COO of 19 Entertainment (creators of American Idol and the Spice Girls).