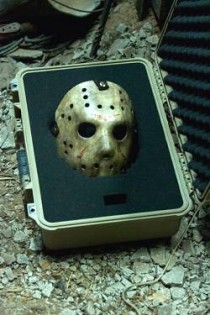 The Platinum Dunes blog, over at Bloody Disgusting, has a new posting by producer Bradley Fuller, with a large shot of the new Jason Voorhees mask from the upcoming Friday the 13th remake. Not sure how they can truly call the film a faithful remake though, as Jason Voorhees wasn’t the killer in the first Friday the 13th. It was his dear mother Pamela Voorhees (who was original played by Betsy Palmer, whom I’ve met at a few fan cons). Derek Mears, who has played in a number of film and TV projects, including Masters of Horror and The Shield, is the new Jason.

Apparently, mom will start the killing off, but Jason will continue her good work. I haven’t confirmed this storyline yet…Could be a ruse!!? But I like Platinum Dunes’ work (aside from that ‘whatthefuck’ Hitcher remake), so this could be very well received by the horror community, and nostalgic movie fans alike.

CLICK HERE to read more about the film, and see a larger version of the mask.

I just found some footage from a set visit. See below:

Film Fetish Trivia: The new Friday the 13th is scheduled to be released on Friday the 13th, 2009. That’s the same day Bryan Singer’s next film, Valkyrie, starring Tom Cruise, and the Jerry Bruckheimer-producer Confessions of a Shopaholic, are currently scheduled to hit theaters.