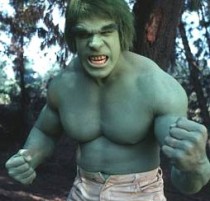 I still think Bill Bixby’s Dr. David Bruce Banner was the best comic-characterization in TV history. As Universal and Marvel Studio’s Incredible Hulk film is about to smash theaters, it makes sense to bring back the show. I just wish iit wasn’t via marathon format. It will be on from June 9-13. Check out Sci-Fi’s local schedule at www.scifi.com for showtimes, and episode titles.

Film Fetish Trivia: In the original TV series, the Hulk usually appeared two times. Generally about 20 minutes after the start of the show, and then during the episode’s climax.